Your End of Year Gift - Hope through Water Filters

We value Isaiah 61, which means we work to:
1. Proclaim good news to the poor and comfort the brokenhearted
2. Proclaim freedom for the captives and bring prisoners
out of darkness


Our next story comes from Grace Andino who shares a powerful experience she had this past summer. 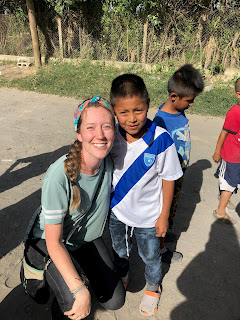 "Over the past few years, we have been partnering with a community in Guatemala called Gerona. At first, many people felt closed off, not feeling like they had space in their hearts for new friends. But after a few years, it has become the highlight of each week to visit this community. For years, we were ministering to only children. Parents were never seen, especially fathers. However, little by little, some mothers began coming to church and now there is a very strong presence of women in the community attending church weekly. When ministering in Gerona, we always stayed confined in the four walls of a retreat center, however, any chance I would get, I would hop in the truck or in the bus to visit a friend’s home down the street. As much as I loved visiting, I always felt a dark presence throughout the community.

This past summer a lot of our ministry took place in Gerona, but in order to bring people into what we were doing, we had to go out in the community and invite them to our activities. During the weeks that I was there, I and many others ended up going down the streets of Gerona door to door and meeting new people in the community and inviting them to experience Jesus.

One of the days we were walking through Gerona, we were 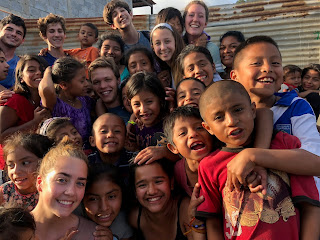 delivering sponsor food. We took dozens of 40+ pound bags full of the supplies that sponsorship provides and delivered them to the children. After the first stop, many parents and children were inviting us to see their homes and wanted to continue talking to us, so we stayed. During this time, a family put on some music and forced the team to dance in front of everyone. Little by little children started to join in and we had a massive dance party in the middle of the street with at least 60 of our friends from Gerona. In the middle of dancing, I realized that it was almost 6pm. Now in Guatemala, the sun begins to set pretty early so it should have been half dark at that point. However, I looked up and saw the sun shining, brighter than I had ever seen before, right onto the street where we were dancing. It was incredibly hot, crowded, loud, fun, and through all of that all I could see was the LIGHT shining down upon the street and the children on it. In that moment, God spoke to me. He showed me that there was light in this community that had not been there before.

He had brought us back to the scripture that Caroline’s Promise is centered upon. Isaiah 61. This was a passage that I had been reading basically every day this year. That day the Lord told me that Gerona is our Isaiah 61 and that He is proclaiming LIGHT and HOPE over this community.

“The Spirit of the Sovereign Lord is on me,
because the Lord has anointed me
to proclaim good news to the poor.
He has sent me to bind up the brokenhearted,
to proclaim freedom for the captives
and release from darkness for the prisoners"

The Lord sent us to this community many years ago to proclaim all of this for the people of Gerona and it began with the children in a small Sunday afternoon service started by our friends at Iglesia Adonai. Through this, the children and young teens are now becoming the second part of the scripture where it says:
“They will be called oaks of righteousness,
a planting of the Lord
for the display of his splendor.
They will rebuild the ancient ruins
and restore the places long devastated;
They will renew the ruined cities
that have been devastated for generations.
Strangers will shepherd your flocks;
foreigners will work your fields and vineyards.
And you will be called priests of the Lord,
you will be named ministers of our God.
You will feed on the wealth of nations,
and in their riches you will boast.”

In the middle of the light shining on the children dancing, I looked and saw the parents, hiding from the heat in the shade. You could see in their faces the joy and the freedom that was just beyond the shadows, but there was still fear and doubt within them.

It is now that our children will begin to minister to the adults in the community. To proclaim this scripture over them and to restore the places long devastated, to grow oaks or righteousness in their people, to allow God to work through them and to bring joy instead of mourning, to provide comfort for those that grieve.

One of the biggest needs in the community of Gerona is clean water. Caroline's Promise has found a way to provide water filters to families that will last 10 years. The cost is only $65 per family and we need you to partner with us to provide as many filters as possible to families this summer.

Will you consider an end of year gift? You can donate here.

Popular posts from this blog

Standing beside each other

March 04, 2019
Oak trees are an amazing creation. They seem almost magical in their ability to grow a mighty oak tree from a tiny cute acorn. We often focus on the beauty of the tree or its acorns- but the most intriguing part might be the unseen part, its roots. The roots of the tree bring nourishment, protect against illness and drought, they even serve as an anchor when the wind blows. Without the roots, we don’t have the tree. Oak tree roots in particular are unique. When all grown, the roots might be 4-7 times larger than the width of the tree. Even if there is devastation, like a fire, a new tree can sprout from the roots of the old tree. One of my favorite parts I never knew- when Oak trees are planted beside each other, their roots can merge tougher and even graph together to become an interconnected system. Stronger, more secure, supportive. God never uses words carelessly. He said in Isaiah 61:3 “They will be called oaks of righteousness, a planting of the Lord for the display o
Read more

February 27, 2019
We are thrilled for the opportunity to provide life saving water filters and hygiene training to our communities in Guatemala this summer.  We will begin this project in June with 50 families in the community of Gerona. Each water filter will last 10 years and provide an easy and effective way to purify water. Our friends at Just One Africa have been using these filters in Kenya and we are thankful for their willingness to help us with our plan.  Check out their video of how the filters work.  Each filter is $65.  If you would like to be a part of this project, donate here.  Be sure to follow us on social media to catch all of the water filter updates to come!
Read more

December 28, 2018
In the Spring of 2018 our Board of Directors spent two days with our friend, Pam Morrison as she led us through Strategic Planning and Vision Casting.  We knew that we needed to change our logo and as we shared our hearts about what Caroline's Promise does and why it exists, it became clear that our foundation is the entire chapter of Isaiah 61. Things started clicking and it became obvious that a tree would be part of our new logo and our Vision Statement became,   "Where Hope Grows and Communities Thrive" We were able to develop our Mission, Vision, and Values .  We walked away, excited about all that God has for the next season of ministry!  For several years we have been blessed to receive pro bono marketing materials from SFW through their 24 hour Createathon.  This December they created our new logo and brochure and we love them!  Over the past few weeks our friend, Boni Russell ( BoniDesign) has worked overtime to design our new website! We ar
Read more